Emma Cahill of South Dublin Taekwondo travelled to Sweden to participate in a double header of tournaments in the Helsingborgs Arena. 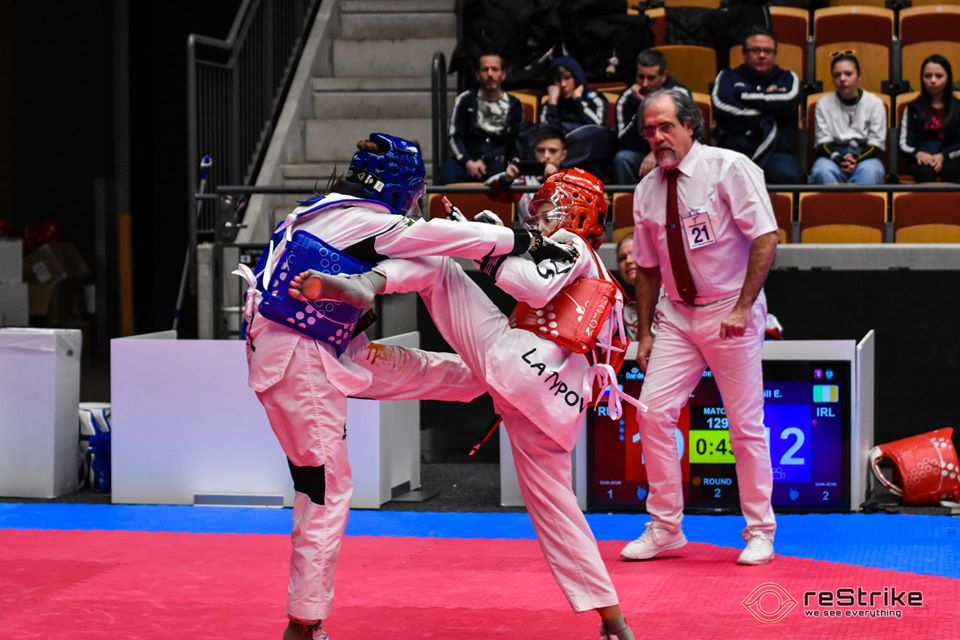 Cahill who competes at -44kg cadet attended her first of two events which was the prestigious World Taekwondo European Presidents Cup which is Europe’s most prestigious open tournament offering automatic qualification to European Major events for Cadets & Junior ages.  Emma was in a well populated division with many top fighters in her way of a podium finish to secure her place in the European Championships later this year. In the round of 32 emma faced off against Selcuk of Turkey who emma saw off convincingly 28-7. In the round of 16 Koumoudi of Greece didnt bother the Irish youngster much, once again winning by point gap 28-6. IN the quarter finals a much sterner test was provided by Ntoufa of Greece, golding Cahill to a closely fought ncounter, which cahill won 16-13 securing herself a medal and National Team placing. The semi final was to be Cahills last outing as she fell short to Korean Opponent Yoonseo who won 13-11 and went on to win the gold. Emma stood at the lower tier of the podium with her bronze medal, aslo securing ranking points at this event which had double ranking points due to its prestige and field of players.
3 days later cahill was back in the arena for the ‘Helsingborgs Open’ another European Ranking event. Making it 3 podiums out of 3 events in 3 weeks, cahill this time won silver by beating Russian opposition Tatyana Vigovskaya in her quarter final bout by a staggering 30-0, in her semi finals she went on to beat Sweden’s  Victoria Craftell by 42-2 once again by point gap finish, in the final match it was a close encounter with Russias Iana Latypova, the RUssian coming out on top with a 19-15 win. With strong ranking points secured in Emma’s first 3 events of the year which included Gold, Silver & Bronze medals, this is likely to put her as number one in the -44kg cadet female rankings which are newly introduced for children’s ages in 2020 within the European Region.
https://www.facebook.com/pg/SouthDublinTaekwondo/photos/?tab=album&album_id=10158235800695979
https://www.facebook.com/pg/SouthDublinTaekwondo/photos/?tab=album&album_id=10158253657915979