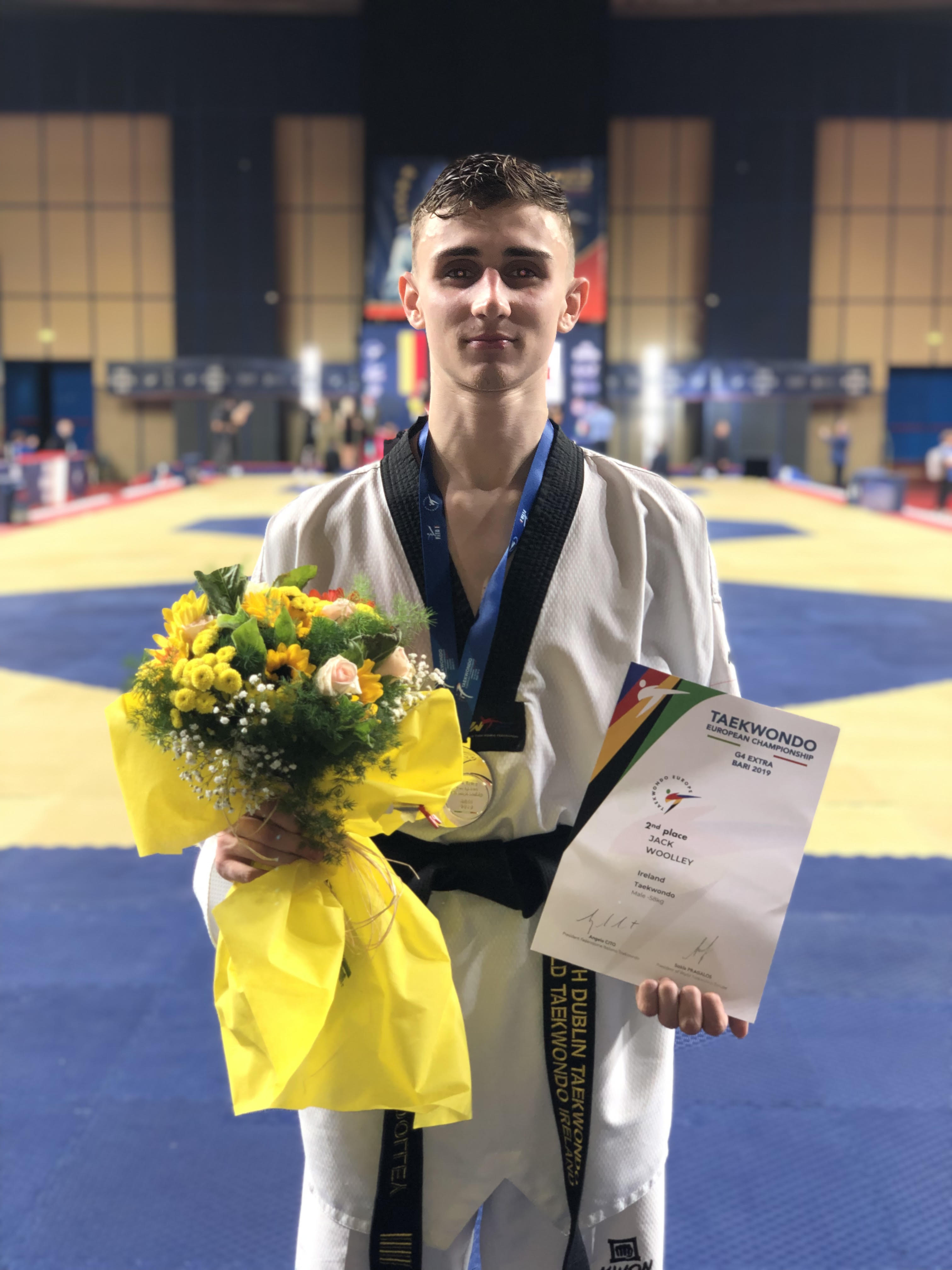 Bari, Italy was the host city for the 2019 European Championships. The three day senior event was held in the impressive ‘Palaflorio’ stadium with Europe’s elite congregating with the primary focus securing the all important Olympic Ranking points before the end of the year. Ireland’s sole athlete was South Dublin Taekwondo’s Jack Woolley who was seed number 4 in the -58kg division. With a bye in his preliminary round, Woolley had the opportunity to view his first opponent fight early who was to be Adil Beldaki from the Netherlands. A comfortable 29-0 score for Ireland’s saw the referee stop the match at the end of the penultimate round. In the quarter final round Jack drew the 2016 European Champion Mourad Laachraoui who had beaten Jack earlier this year in the Japanese Grand Prix, however a change of approach by Woolley seen him control the match to close out with a 20-11 victory scoring a mix of basic and elaborate extravagant kicks. Now into the semi-final against top seed Jesus Tortosa Cabrera, Jack had a giant task in front of him as he faced the towering frame of the Spaniard who finished 5th in the Rio Olympics. The semi finals & finals which were live televised generated an electric atmosphere, in which Woolley grew and took great encouragement from. An early spooning kick to the body for 4 points, followed by an immediate head kick for a further 3 gave jack a 7 point early lead which he built to 12-0 after the first round, leaving the match well under his control. Carrying on the same fine momentum and composed performance, jacks precision scoring and excellent blocking enabled him to cause an upset and beat the favorite by 23-11. After overcoming the statistical favorite, jacks next task was to defeat the home favorite in the final, Vito Dell’Aquilla of Italy in his home event. The Italian who was seed number three caused deafening noise as he entered the arena, with every kick met with cheers, gasps and applause. Jack took an early 4-0 lead in the final, which the Italian brought level to 4-4. In the second round the Italians lead took a stretch and the match looked like it may have been slipping away from the Tallaght native, until he landed a ferocious spinning head kick adding 5 points to his tally. The scores were back and forth throughout until jack retook the lead in round three. In the dying seconds in the lead the Italian landed a head kick on Woolley to snatch the lead from him with little time remaining. Jacks coach Robert Taaffe played his video replay card to try contest an infraction of the rules as the final score landed, however the protest was declined by the video review jury. As the match ended the 2 young adversaries embraced and raised one another’s hands while as Jack and Ireland secured a hard fought, well earned silver medal. The grade 4 event gives entrants quadruple ranking points, so jack left with 24 ranking points to keep him within touching distance of Olympic Qualification. The remainder of the year will now comprise an outing at the French Open in a fortnight followed by the Grand Prix Final in Moscow in December.