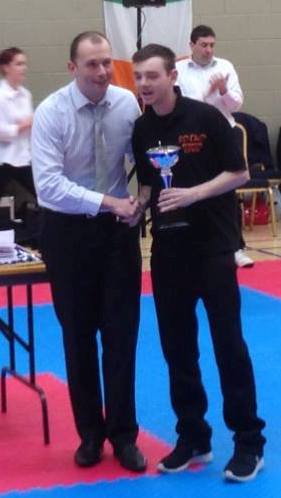 South Dublin Taekwondo attended the Fingal Open in Sportslink Santry on 19th May, hosted by Ilyo Taekwondo Club. With 40 entries on the day we had a good spread of athletes in a wide varieties of ages, grades & abilities. SDTKD had entries in Children & PeeWee in the Morning & Cadet, Junior, Senior & Veterans in the afternoon fighting using Electronic PSS protectors.

With so many fantastic performances on the day it is hard to give all a mention, but performances of particular note would include:

– Comback of young Oisin McKenna seeing off a bigger fighter after being absent or some time, and going on to take home gold.

– Karl Negrillo & Mark Stanley having a thrilling semin final with mark coming back from being 2 head shots behing in Round 1.

– Janella Depakikibo going all the way with a giant opponent, almost beating her, but falling short in dying seconds. Janellas usual head shot magic was not possible as she couldn’t reach the head of much taller opponent!

– Gabrielle Sweeney delighted onlookers with some strong front leg axe kicks proceeding to a gold medal in his division.

– Kim Rena showing some excellent kicking ability going on to win a gold.

– Young Jamie Gaffney was clinical in his bouts winning him gold. Looking strong.

– Ryan Woolley’s thrilling semi final was clinched with a dramatic spinning head shot having the crowd on their feet. A closely contested final saw Junsa clinch the Gold.

– Newcomer Anas & Dylan both impressed in an exciting Tag Team event at the interval, with Anas proving the dominant player on Leinster select squad landing some serious head shots. Anas later went onto Gold in his -87kg A Class division marking a good introduction to Irish competitive Taekwondo.

– Dave Murray & Mario Maleka, parents on the mats entered as Veterans were in flying form.

Whilst the day had some disappointment for players which is inevitable with such a spread of athletes participating, as a collective club performance the team were working great together in the competition area. Well done to all & thanks for all the assistance from coaches on the day lead my Master Taaffe, Supported by Mr. Murphy  & supplemented My Mr. Woolley & Mr. Leonard when required. Also major thanks to Mr. Leonard for managing all Taekoplan online entries & having all done diligently by tournament deadline.

Any observations – positive comments / constructive criticism on SDTKD’s participation & management at tournament welcome to info@sd-tkd.com so we can strive to improve all for club members continually!