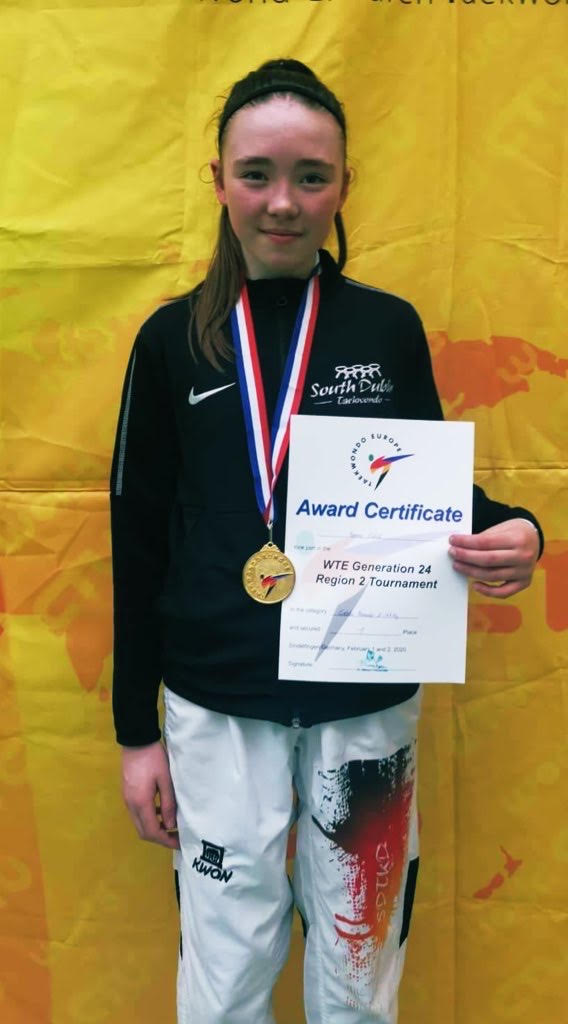 Emma Cahill was South Dublin Taekwondo’s first athlete to be back in competition this year. Experimenting with the higher weigh of -44kg Cadet Female, Cahill came out on top of her division securing her first gold of the year. The event run in Sindelfingen, Germany was a newly introduced event called ‘World Taekwondo Europe Generation 24 Championships’. The Generation 24 event organizers note, ‘ Among the objectives of Taekwondo Europe is to remain the leading Continental Union in the Olympic Games. Therefore, the upcoming taekwondo generation representing Europe in the Olympic Games Paris 2024 and Los Angeles 2028 is in the spotlight, ensuring that its competency and taekwondo level skills will bring more ‘Olympic’ recognitions. On that account, Taekwondo Europe introduces ‘Generation 24’ ; a project targeting to develop taekwondo Kids and Cadets. ‘Generation 24’ includes the implementation of regional Childrens and Cadets events, enhancing in this way the progress and advancement of these age categories and their future inclusion to the elites of taekwondo.’

Cahill came out top in her region of the new tournament with a trio of victories over athletes from Switzerland, Germany & Ireland with scores of 13-5, 7-5 & 25-4 respectively. With support from back home watching on the live stream they were firmly kept on the edge of their seat as Cahill pulled back a 4-5 deficit in the closing seconds of the semi-final, hitting her German opponent with a critical had kick to take the win. The event will help the 13 year old youngster to gather momentum for upcoming events in Sweden & USA as Cahill carves out her final busy year as Cadet before transitioning to Junior in 2021.