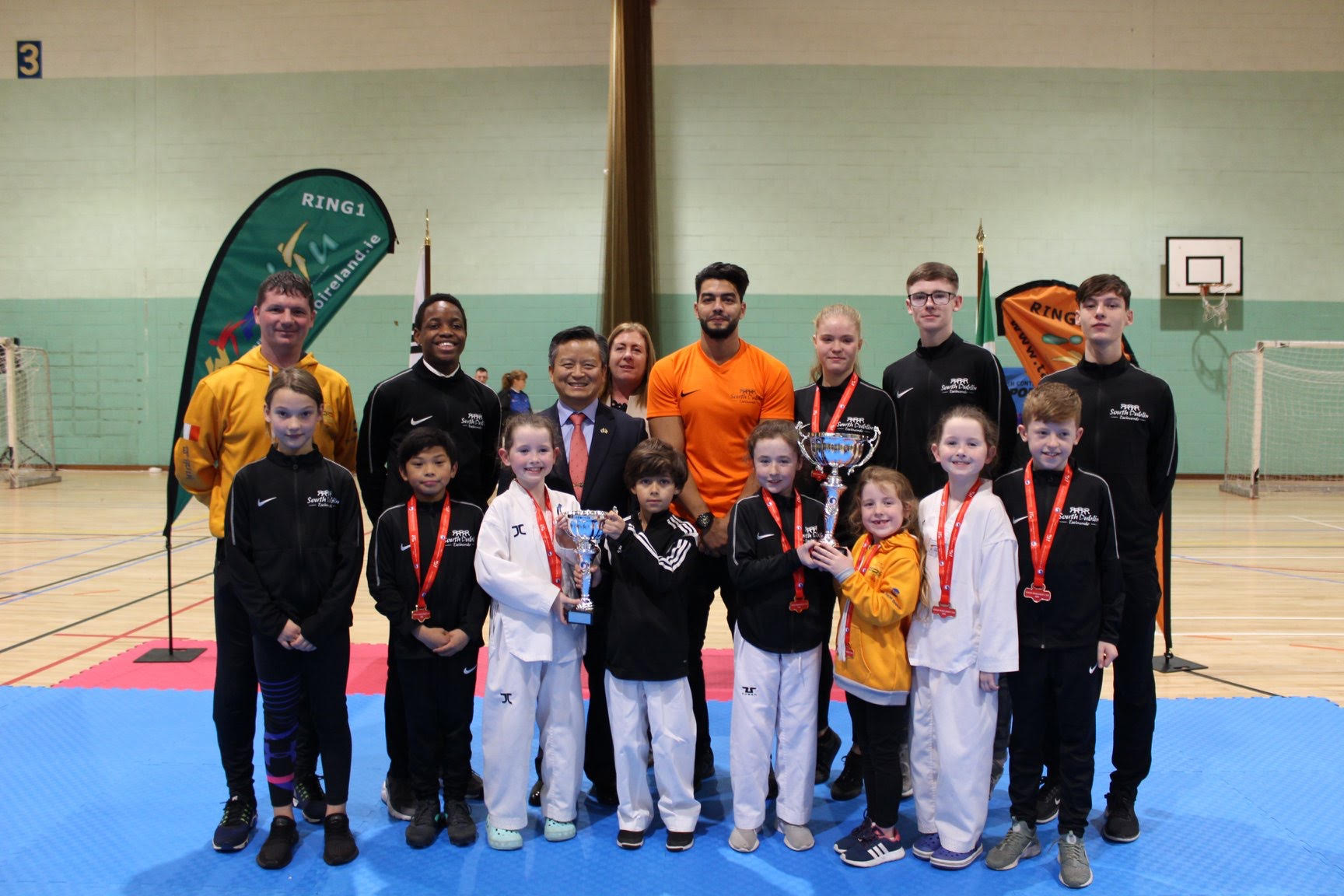 The 6th Korean Ambassadors Cup was held in Gormanstown Park, Co. Meath last weekend which was the last Olympic Taekwondo Event of the year. Tallaght’s South Dublin Taekwondo Club fielded a diverse team of 29 athletes of grass roots beginners up to international elite athletes at the event which catered for all levels. The event which is the biggest event in the Irish Taekwondo Calendar is supported by the Korean Embassy in Ireland and was attended by the Korean Ambassador to Ireland Woon-Ki Lyeo and also Olympic Federation of Ireland CEO Peter Sherrard. The event now in its 6th year was a platform for many of SDTKD’s beginners to have their first competitive experience, most notably twin sisters Éabha & Caoimhe de Búrca who were entered in 2 consecutive weight classes to keep them apart. The 8 year olds were both gold medalists in the -28kg & -32kg divisions respectively. Both youngsters came from SDTKD’s Taekowndo Tots programme where they trained since they were 4 years old and now are beginning to make an impact in full taekwondo. Another peewee first timer who reached the top of the podium was Tyler Waters who won his +36kg division. A debutante performance of note also came from  Lisabeth Mahesh who appears to be one to watch. The 12 year old won her -51kg Cadet female division with high points scoring on her first outing using the electronic scoring systems used by Taekwondo Ireland at the event. The beginners & intermediate athletes were delighted to attend an event with many of SDTKD’s more experienced athletes. Irish Team Players & World Ranking Event Gold Medalists  David Phelan & Lauren Farrell gave a great example to their team mates by securing golds in their Junior divisions with clinical performances. SDTKD Club were delighted to top the medal count once again in overall stadings which is their 6th time in the 6th Year existence of the event. Club Coach Anas Belmaati who led the team at the event was delighted that his young son Adam [7] got hios first taste of competition  noted, ‘SDTKD Club are ten years old now, we entered strong teams to the 2 most prestigious events in Ireland this year, the Korean Ambassadors Cup & Irish National Championships. We are delighted that in our 10th year our team is now once again Irish National Champions & have topped the medal count for the Korean Ambassadors Cup for the 6th consecutive year. Our athletes & coaches have had a very busy year, and it was a great way to finish up, with many of these athletes changing categories from the beginning of next year. Our children & peewees really shone today, without them we would not have been so successful overall.’ SDTKD continue to train over the Christmas period and are looking forwad to welcoming some new recruits to their Club in January where they plan to develop the next generation of local taekwondo enthusiasts.