Tallaght Leisure Centre was the host venue for the prestigious Korean Ambassadors Cup 2019 which saw 400 entrants take part in the 2 day Taekwondo Extravaganza. The event which was opened by a spectacular acrobatic demonstration by the Taekwondo Peace Corps was the final event in local club South Dublin Taekwondo’s’ calendar. Day 1 was composed of the non-combative sport discipline ‘Poomsae Competition’ [Forms]. SDTKD fielded a 20 strong team of Poomsae athletes from beginner advanced in individual competition, pairs [one male & female synchronised] and team [three same gender synchronised]. With many medals achieved, and most importantly great experience at the event & in preparations, some highlights included; gold for team Sean Byrne, Oisin Murphy & Shae Yambao, and bronze for pair Jack Cagney & Jasmine Kelly. Day 2 was the turn of the ‘Kyorugi’ [sparring]  athletes.
On day 2 a well-represented SDTKD team had 46 individual entries in all divisions from pee wee to senior. On a day where medals were plentiful and valuable ring time was in abundance the team were in excellent form claiming many accolades with many of the more experienced SDTKD members leading by example. In his first senior bout, Leroy Dilandu, 17 won gold for his performance in -68kg and also secured ‘Senior Fighter of the Tournament’ for his spectacular fighting display. A convincing gold for Ryan Doyle, 15, in the junior male -59kg division wrapped up strong finale to the youngsters year. Cadets Sean Byrne & Oisin murphy played out an exciting final, with Sean winning gold, Oisin the silver, and similarly, in one of the most exciting divisions of the event Kate McGovern secured a hard earned gold piping her team mate Andrea Bila Erliha to 2nd place in a crowd pleasing final. At the other end of the spectrum in the peewee divisions, some heart-warming displays were shown by; Julia Malecka who secured an excellent gold, Leonid Drogomyretskij and Alan Misiak had a nail biting final, with the former winning 1st place,  Lhayum Tara Murphy and Preia Waters as they battled it out in the tiny pee wee female division with Lyhaum coming out on top, and youngest competitor Nicholas Buffini-Taaffe made coaches [mammy & daddy] proud at his first event winning gold in the -20kg division. The event was wrapped up when the Koream Ambassador to Ireland presented many awards, some of which SDTKD were delighted recipients of; Julia Malecka was awarded best Pee Wee of the tournament, Leroy Dilandu Nsilu won both ‘Senior Player of the Tournament’ & ‘Official of the Tournament’, SDTKD were awarded 1st Place Team Honours for Sparring & both Jack Woolley & Robert Taaffe were handed awards acknowledging their ‘Achievements & Outstanding Contribution to Taekwondo In Ireland’. 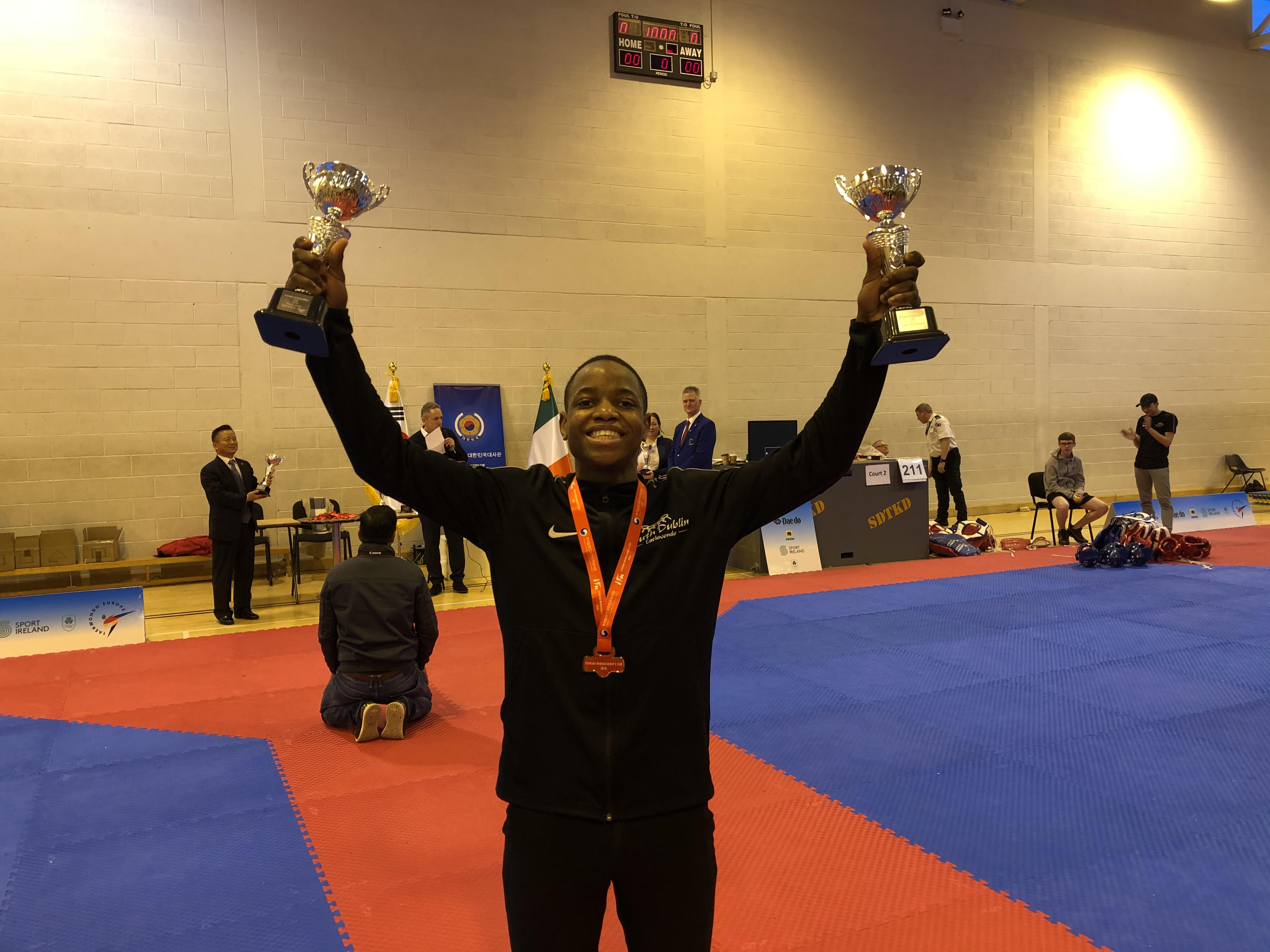 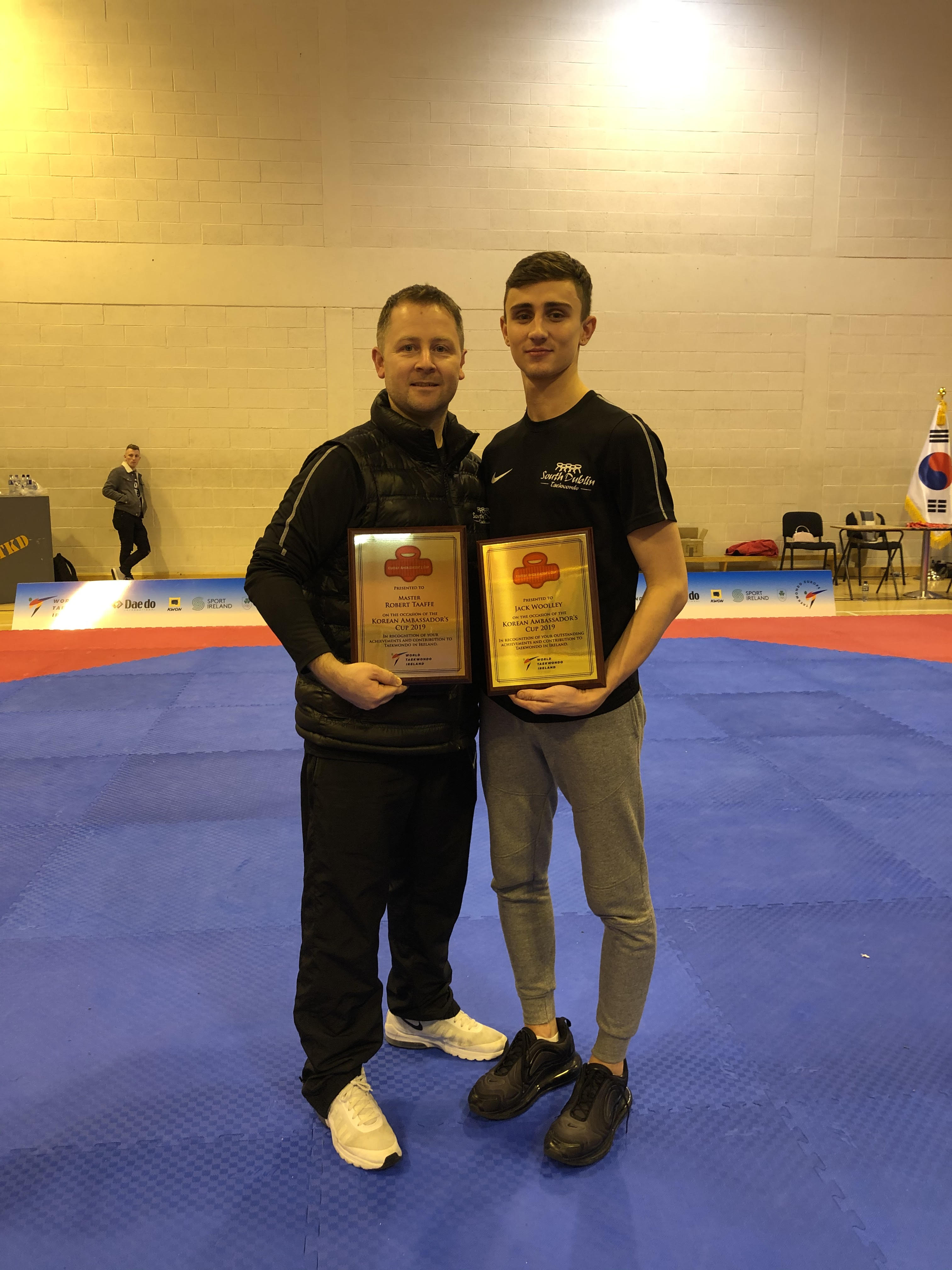