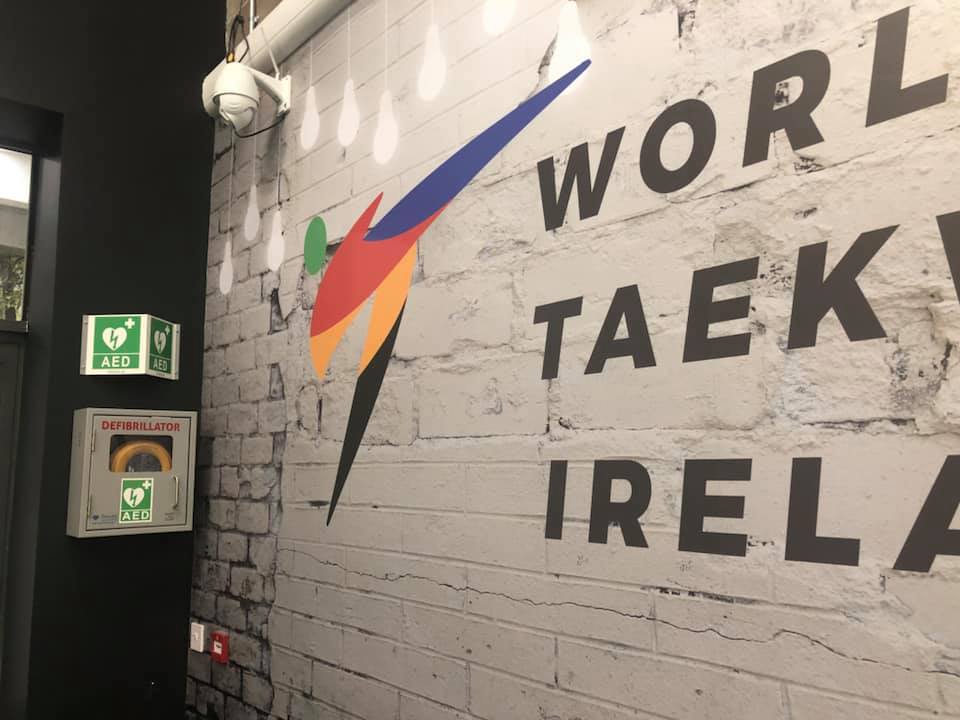 South Dublin Taekwonodo Club, based in Tallaght, Dublin have just turned 10 years old. The clubs growth & development in their local area in Tallaght, Dublin has led to them pursuinig and securing a stand alone taekwondo premises in the Area. ‘South Dublin Martial Arts & Fitness Centre‘ Opened its doors for the first time at the Start of October. The club decided to look for a new smaller home to assist offer their members greater training options & opportunities, with greater attention to detail and ensure their High Performance athletes needs were being fulfilled to their full potential. The process was a lengthy endevour. Since 2013 SDTKD have viewed many premises, and almost signed leases with various landlords, but when the final detail of leases, planning & design was considered the Club Head Coach Robert Taaffe put the brakes on as he was not fully satisfied with arrangements, the current use & the locations and feedback from surveys conducted and local case studies on shortliested venues. ‘We have been holding tight for quite some time until a venue presentred itself that suited our needs best. Location was paramount, our new venue is 5 minutes from our previous HQ in Tallaght Leisure Centre which is convenient for all of our existing members, and it is within a shopping mall at The Arena Tallaght which is secure and safe for our members. Any building needed to be futureproofed, and our new venue with 7m high ceilings offers us future expansion space for club planning projections.’, noted Taaffe.

SDTKD originally identified the premises in 2016 and took some time to progress from first viewing to final occupation. The former barbershop was converted to a Sports Facility by going through all of the pre-requisite local authority conents; Planning Permission was achieved, a new Fire Safety Certificate was secured and also a new Disability Access Certificate ensuring the premises was fully compliant with regulations. The design and applicaiton process and  the contractors delivery of the project on site was overseen by SDTKD Club Coach Taaffe. He noted, ‘It was very important for us to ensure that the building had a full clean bill of health for our members, through my day job i come accross some horror stories of gyms and sports clubs setting up venues to hastily, and we proceeded with caution throughout the process. SDTKD still remains to train at Tallaght Leisure Centre, in a fantastic venue for some designated sessions and larger events. The large hall with balcony that has been a massive part of our development, but now we have an extension to the club where our coaches can offer some more detailed specific training in smaller groups to our members’.
Pictured is the group of SDTKD Lead coaches who deliver the majority SDTKD’s training; Robert Taaffe [6th Dan], Niamh Buffini [5th Dan], Jack Woolley [4th Dan] Anas Belmaati [3rd Dan], Dylan Leonard [3rd Dan], The clubs coaching personnel are all highly qualified & experienced in their field, all holding World Taekwondo Europe Coaching Licences, and all of whom have successfully coached medals at World Ranking Events. Each coach would have their own independent traits which provides a diverse amount of experience for members to absorb information from.
SDTKD’s new venue whilst modest in size compared to what they are used to, has enabled the club to conduct smaller group sessions in a venue that is enabled with electronic scoring equipment, video replay cameras and video review analysis capability.
Coach Taaffe noted, ‘A large portion of this facility is dedicated to the detailed training of athlete Jack Woolley. We wish to give him the greatest arrangements possible in the lead up to Tokyo & beyond. Europe is the hardest continent to qualify for the Olympics from, and we wish to leave no stone unturned in our Olympic pursuit. We have already seen a massive surge & consistency in his performances with the extra attention to detail and we hope this will play its part in assisting to secure his Olympic berth and pave a pathway for his team mates in both SDTKD & the Irish Team. If he qualifies, he will be a medal hopeful in the field of 16 athletes.’ ‘We did not have any opening ceremony or party, from the day we had the keys we were under pressure to prepare for many events so we hit the ground running. We have been delighted to have been joined by many visiting athletes, most notably teams from Spain & Australia who used the venue as a hub pre-competition. We are part of a multi-premises complex including a Maldron Hotel & Club Vitae [Gym], both of which have been very accommodating to our club and visitors. We have spent years travelling the world to camps, now we know we can attract people to come to train with us so we can have camps on our doorstep.’ ‘The project would not have been such a success without the great help from 2 local companies; Nugent Contract Cleaning who have been supporting our club immensely for years and Vision Branding who helped us with some of the finishing touches. Our club members were amazing. We had onnly a couple of days to convert a grey box into a working martial arts gym and with many people rolling up their sleeves we succeeded.’ Coach Taaffe who is Performance Director of the World Taekwondo Ireland sites further supports; ‘World Taekwondo Ireland, Sport Ireland & the Olympic Federation of Ireland have been great supporters of our ambitions at both Club & National Team Level. Largely through the results that have been achieved and the progression made by Jack on the international stage with many of his younger counterparts now starting to follow in his footsteps, Taekwondo has now been reinstated as a Sport Ireland carded sport and the additional support that can be achieved by reaching some sporting milestones is proving to be a great asset in providing improved facilities & resources to our taekwondo athletes. At local level the South Dublin Sports Partnership have always been very helpful with our clubs needs and remain in constant contact discussing our club development.’