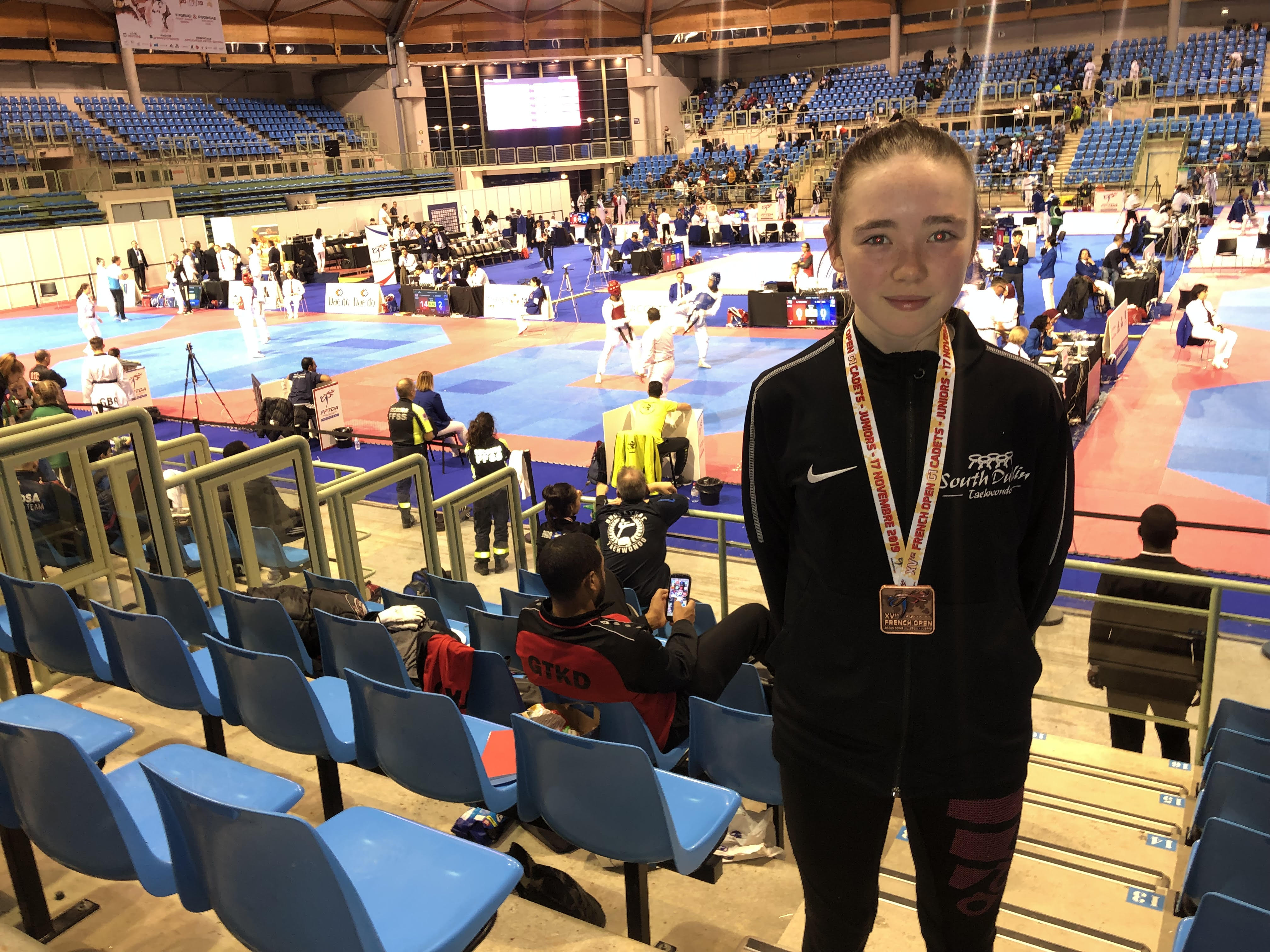 In her last event of a busy 2019 Emma Cahill wrapped up her competitive year with a bronze medal at the Paris Open. The event which is known as one of the largest populated events in the World Circuit added cadet age categories to the event for the first time permitting Cahill to travel with her older team mates. The new cadet age categories did not disappoint, as the centrally located country had many visiitors from the countries they share borders with & further afield as far as Japan, Usa and Australia all congregated at the beautiful venue – The Grand Dome on the outskirts of the city . The 13 year old cadet athlete showed why she is known as one to watch on the European Circuit after an excellent display. With little to play for the remainder of the year, Emma travelled with plans to adapt and try out some new approaches in her match play. Emma had a bye in her opener followed by a quarter final match with Germany’s Lilly Ettelbruck. After 2 of the three rounds, Emma was in a clear lead, and decided to change fighting style in the last round and landed some excellent extravagant kicks with a 19-2 final score. This led to a semi-final bout with current recently crowned European Champion Tasha Viskens from Belgium. Emma started the match strongly leading for much of the bout, however a well-executed spinning kick for 4 points by the Belgian drew the match level. An unfortunate slip by Cahill offered her opponent a decisive one point advantage with the match eventually ending 6-7 in favour of Belgium. With a bronze medal secured, and some disappointment of missing out so close on one of the biggest matches of her career, Cahill soon refocused to think ahead for 2020 after an excellent competitive year in 2019. With many trips under her belt, Emma secured medals close to home including; a trio of golds in Ireland, England and Scotland where she prepared tactics for international ranking events further abroad winning medals in some of the most testing events in Europe including; Silver in Belgium, Gold in Sofia, Silver in Poland and Bronze in Paris. Commending her performances in 2019 her coach Robert Taaffe noted, ‘It’s been a good year for Emma, her application in training and attention to detail has been excellent. We have targeted a list of events this year to try give Emma and her team mates the best development possible and she has really shone in some testing divisions. Although much success is attributed to her many medal winning events, lessons learned in events with no success like Germany and Luxembourg are just as important to ensure the athlete can learn more about themselves, dynamics with coaches and stay hungry. Emma has set herself up for a very exciting 2020 where it is planned to start making preparations and adaptations for a seamless transition to junior ages in the near future.’