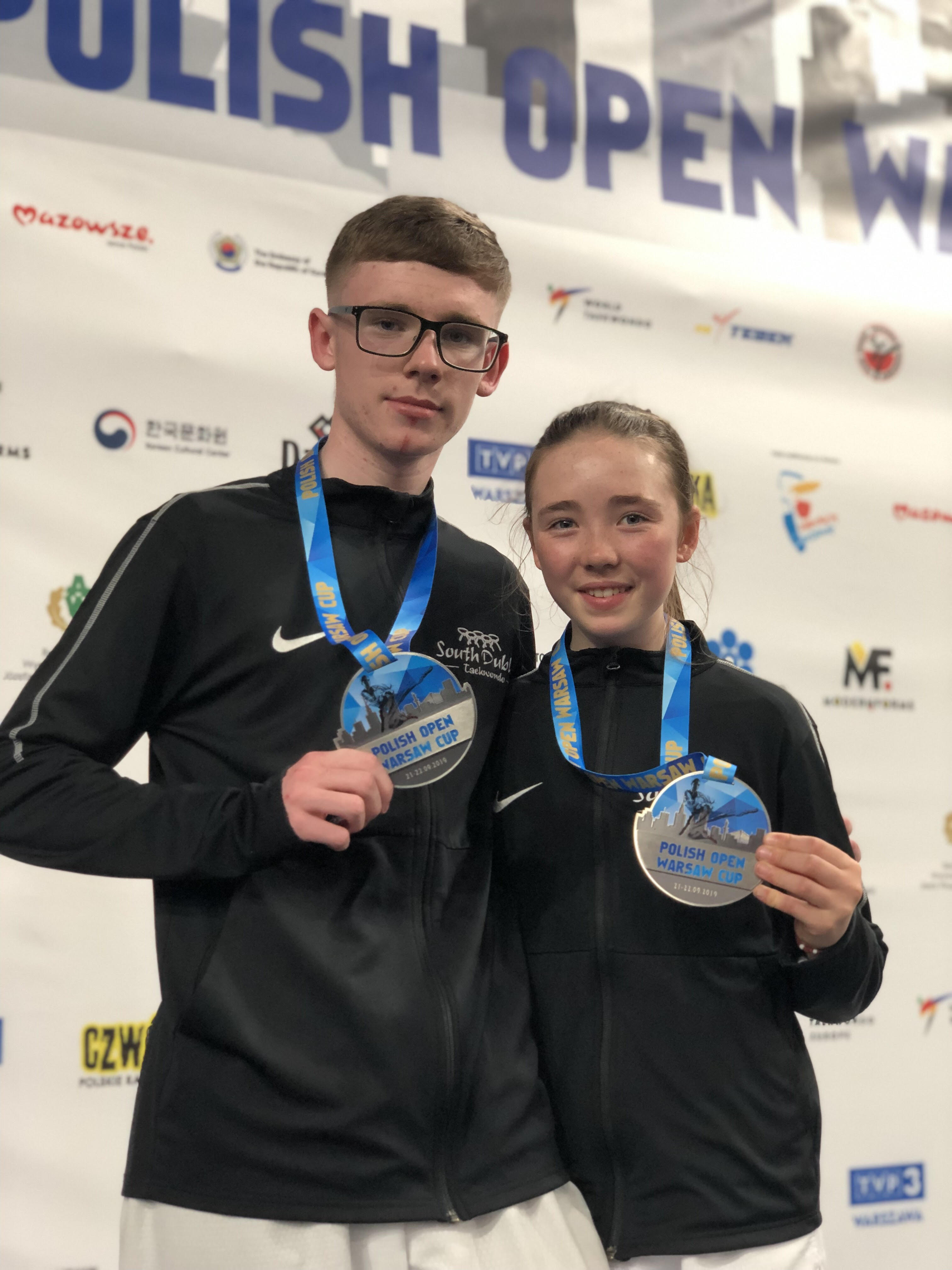 South Dublin Taekwondo made their now annual trip to Poland for the 2019 Polish Open / Warsaw Cup held in the Torwar Arena, Warsaw. A team of 7 athletes were fielded, made up of some experienced athletes, and some development athletes. The 2 day event in the Polish capital once again proved to be a good test for the SDTKD athletes, with lessons learned, experience gained and some medals achieved for the team. Highlights of the event include a brace of silvers achieved by Irish Athletes David Phelan and Emma Cahill. Phelan who competes at -63kg Junior found himself in a heavily populated draw with a total of 5 matches required to gold. He started off his day with a 17-10 victory over Theofanis Nikolau of Greece, who is a 2018 European Champion. The tough test started with a strong round from Greek, but after some adjustments after round 1, David took control and saw off his opponent. In his round of 16 march David faced Enzo Comprelle from France, where the 16 year old Dubliner carried on his strong momentum to win 21-7 and line up a quarter final with Matthew Howell of Great Britan. The two had fought last year with the British fighter taking success on that occasion, but this time it was Phelan’s turn, where he approached the match to adjust from last year’s encounter, and without one of the matches of the tournament gave rise to a 29-21 win to SDTKD. With 3 down and 2 to go, in a very physical division David & his Coach Robert Taaffe reviewed progress, with one eye on the Junior Europeans in 2 weeks time. After a semi final victory over  Ilya Chakasau of Belarus, it was decided to call it a day and withdraw from the final to ensure Davids preparation for the Europeans would not be hampered. Also reaching the 2nd tier of the podium was Emma Cahill, the young Dubliner from Baldoyle, who makes the trip to Tallagh t throughout the week was once again in top form at another World Ranking Event. The plucky head hunter who just turned 13showed great maturity and composure in he matches. Starting the day off with a bye, Emma had visibility of her first opponent Elina Khizbulina from Russia allowing time to prepare a strategic approach to cancel the Russian. A good started ended up with a 23-5 vistory, leading to a semifinal match with local Anna Pawkiwska of Poland. With a loud crowd supporting the local, the Irish supporters drowned out the support in favour of their team mate assisting Emma on her way to a 23-2 win. Now with one match remaining against current European Champion Nika Karabatic of Croatia, Cahill & Coach Taaffe had to study the opponent carefully and adjust Cahills approach. The atller Croat who is known for her devastating attacks was held to a stale fight by the SDTKD athlete keeping the scores low to 0-2 after round 1, with an unlucky attempt from Cahill striking the plastic face mask there was hopes of a revival later on, however the Croat managed to squeeze Emma back to the perimeter of the ring taking a further lead. With nothing left to loose, Emma went for her opponent in the latter parts of the final, but the Croat showed why she is the best in Europe and won 19-0. Outside of medal performances, one further highlight of the day was the performance of ranking event debutant Shauna Farrell. At her first Cadet level event, she amazed the crowd with a n upset of local Natalia Maria Sozynska with a 39-19 preliminary match in the quarter finals. Shauna fighting at -44kg didn’t get past her later semi final, however a well achieved 5th place finish was in many respects a major success of its own and shows great potential for the youngster who appears to be setting herself up for a strong 2020. A return to the ring after a long term injury for  Adam Nugent in the -63kg Senior division was a good milestone for the team, whilst not securing the win hoped for, Adam showed he is almost back to full fitness. SDTKD Coach Robert Taaffe summarised; ‘I am very happy with the overall team effort, we know there are many areas to improve, and it gives us some focus for the remainder of the year and start to next year’s calendar. Poland is always selected on our calendar due to the calibre of opponents, and many from eastern European countries give our players a different type of test. We have done a lot of hard work, but there is much more still to do. It has been a very testing time for our club recently, but the team focus and effort has seen us through and taking away 2 medals from Poland are 2 medals for the team, not just the individuals.’ Next up for SDTKD is the upcoming European Cadet Championships with Emma Cahill in attendance, the European Junior Championships which will see David Phelan & Lauren Farrell in action, before returning to the senior circuit with a series of final events to attempt to secure an Olympic Berth for Ireland at Tokyo 2020