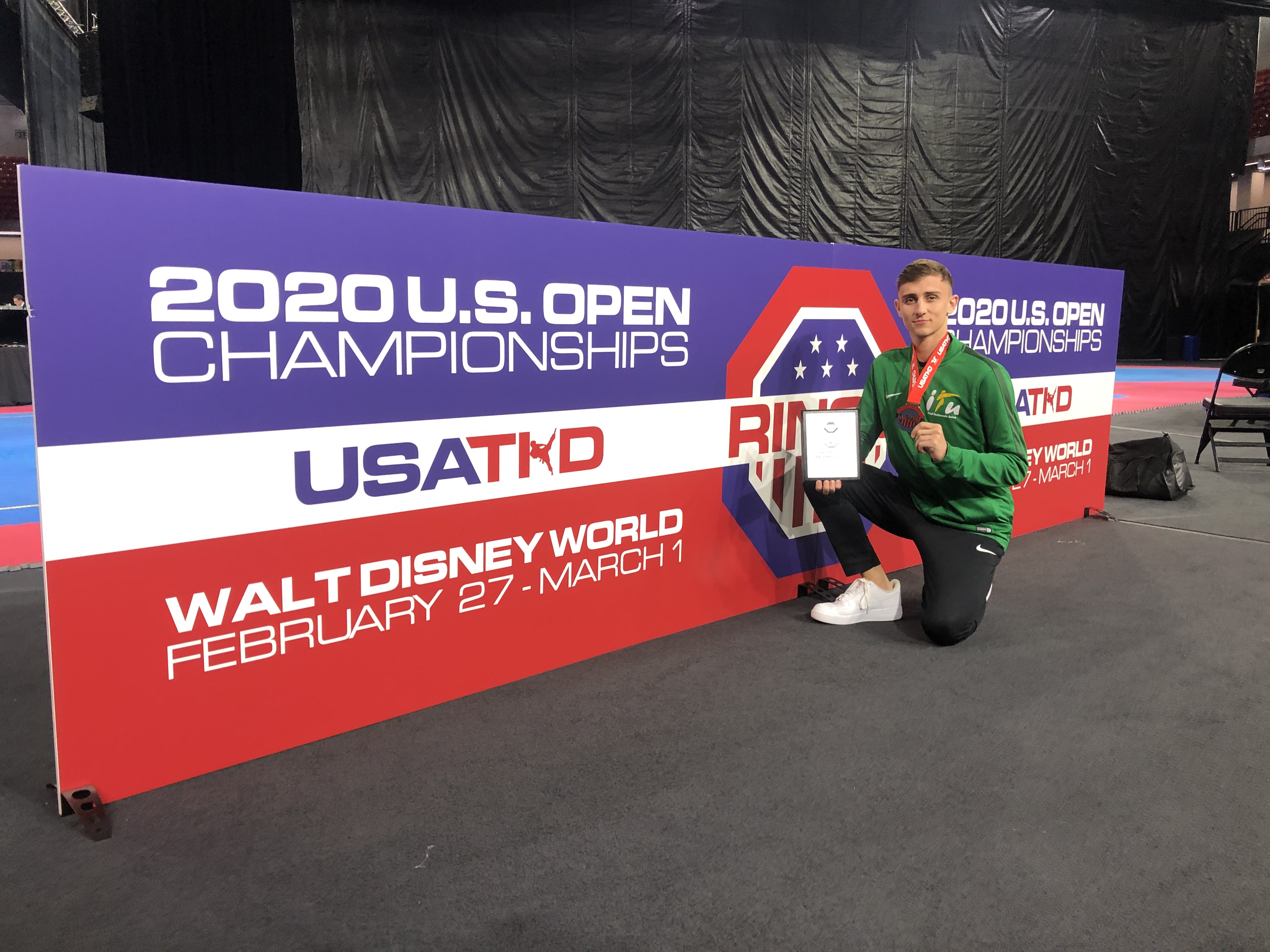 Jack Woolley made a statement of intent with his latest performance in Orlando, Florida last weekend. The 21 year old Tallaght native returned to the location of his first senior event which was in 2015 where he stunned the world winning a bronze at the prestigious US Open whilst still a junior. In total since 2015 Woolley has attended the US Open 5 times, picking up 6 podium places as he was allowed to enter both junior and senior in 2015. His latest medal addition, the most substantial. Jack came away from his -58kg division on top of the podium at this massive tournament where he overcame the Olympic Ranked number two in the final in a gripping battle of the two taekwondo superstars. The final which was contested by 2 athletes already qualified for the Tokyo Olympics was an amazing spectacle. Jack took the lead over Jesus Tortosa Cabrera from Spain with his opening exchange, however the tall Spaniard came back and stretched ahead. With both fighters exchanging blows jack came back with a series of jumping looping head kicks over the guard of his opponent who placed 5th in the Rio Olympics. With scores going back and forth, the final score after the regulation 3 rounds of 2 minutes was tied at 15 points each. The gold medal was to be decided by a ‘Golden Roun’. [First to score 2 points]. With 7 seconds remaining of the final added round, Woolley made the break through winning with a pushing kick to the chest of the Spaniard, to the roars of the crows in the massive stadium in Walt Disney Worlds ESPN Arena. To add to the accolade the male Player of the Tournament award was bestowed upon Woolley for his devastating & highly entertaining performances throughout the day. The event known as the largest open taekwondo event in the world has no less than 2200 individual registrations from over 40 countries, all black belts in advanced divisions. The tournament is now an annual event for South Dublin Taekwondo where they push themselves against fields of players in massive divisions which gives rise to 5-6 matches to secure gold. Woolley with a bye I round 1, had to secure 5 strong victories to win the highest accolade.

Joining Woolley and also making a massive impact was his team mate David Phelan who won bronze in his -63kg junior division. After 5 strong fights, Phelan started off his final junior year setting good foundations for is cross over to senior this year. Phelan also scored what is called the ‘kick of the tournament’ online when he landed an extravegent spinning head kick to his opponent, remving his head gear and causing a standing 10 count by the referee. A trio of south Dublin athletes was made up finally by Emma Cahill who fought in the female -44kg division, who unfortunately settling for a 9th place finish could not continue her streak of form which saw her achieve 3 ranking podiums in the 3 weeks previous in Germany & Sweden. The fighters will rejoin their team mates for further training this week before going to the Sofia Open in Bulgaria this coming weekend.